As it has been mentioned in different scientific sources it is known that well killing is often accompanied by the absorption of liquids, which significantly reduce the productivity of wells. In commercial practice, a large number of chemical reagents are used to treat killing fluids in order to reduce lost circulation. Therefore, this technology has been used for Temporary Well-Killing & Reducing Lost Circulation.

Well-killing Project has been done in Iran by Samen Industrial Group (SIG) & NISOC for the first time. The first, second and third projects of temporary well-killing & Reducing Lost Circulation technologies, in Well Ahvaz 104, 387 & Karanj 11 respectively at Ahvaz & Karanj Fields of National Iranian South Oil Company (NISOC) have been performed successfully. After well isolations, in first and second projects, workover operations would be done. In addition, in all above mentioned wells, the amount of lost circulation has been reduced sufficiently and the production rate has been increased. 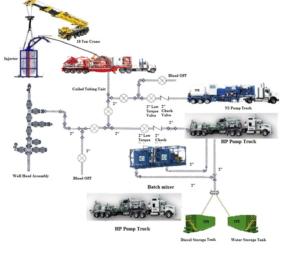 The studies had been resulted, the effect of some additives such as 0.5% nonionic surfactants and 0.75 anionic surfactants on 20% activator solution illustrated that the recovery rate of permeability for sandstone and carbonate formations would be 76-90% and 67-94% respectively.
When the mentioned surfactant is added into the solution, the micro particles form. As a result, their sedimentation rate increases, which avoids permeating from penetration into the pore space therefore the permeability recovery coefficient improves and increases.
For a carbonate core sample on the killing liquids, the dependence of the blocking solution’s absorption on the pumping pressure and the addition of 0.5 nonionic surfactants and 0.75 of anionic surfactants is also established (Fig. 2).
In accordance with graph analyses, the intensive absorption of solution occurs at the time when the crack fills, decreases as the dehydrated gel mass forms, and stops after compression. When the solution pumping presser become more than the pressure of the hydro-pressing, the growth of cracks rises therefore the process is repeated again. At lower pressure, the addition of anionic surfactants caused sever damages to the cracks like breaking down them. On the other hand, the breakthrough pressure increases. The termination of absorption begins at a pressure drop of up to 0.2 MPa, a second breakthrough occurs at the ?P = 10.2-10.5 MPa.

Figure 2 Dependence of the blocking solution’s absorption on the magnitude of repression for various killing fluids:
Additives: 1 – no additives; 2 – 0.5% nonionic surfactants; 3 – 0.75% anionic surfactants

Thus, it can be concluded that it is possible to use for well-killing the compositions that form gels to preserve the natural permeability of the layers.
The basis of the developed killing technology and development of the wells would be resulted experimental research and analysis of the literature data.
In the process of field trials, several methods differ in the scheme of binding equipment and sequence of pumping were tested. Since the formation of blocking composition is formed in the wellbore, cementing units are used to pump the reagents, which are attached to the well target assembly. Depending on the specific state of the well, the pumping of the initial components is performed jointly.
Pumping sequence during the operation of well-killing:

With this pumping sequence, the solutions mix and react only at the bottom.
If there is no packer in the well, the solution is pumped through the tee. Simultaneously, the reaction of the components occurs immediately and the blocking composition by the quenching liquid is forced into the bottom hole.
The well is sealed for 3-4 hours until the components of solution react exactly.
The quality of blocking is established by the subsequent addition of technical fluid.
The practice of using the developed blocking composition indicated its advantages over other methods:

Industrial tests of blocking the bottom hole zone’s technology which was related to absorbing layers were carried out at the fields of the State Enterprise “Ukrhazdobycha”.
The feasibility of using the temporary blocking technology in the bottom hole well zone with various lower layer pressures are studied (Oposhnyanske, Kotelevske, Timofeevskoye gas condensate field). In addition, this kind of study is the aspect of particular science and practical interest.
In the Timofeevskoye gas condensate field during the blocking composition test, the layer pressures decreased by 66.9%. The purpose of carrying out workover services at the well 54 Timofeevka was the replacement of tubing. Previously, the well was killed with an aqueous solution with surfactant, which was accompanied by absorption (up to 100 m3), so it was decided to block the absorbing interval. The killing was carried out by consecutive pumping of the developed composition with a total volume of 10.6 m3. After 12 hours, the well was discharged and it was determined that blockage of absorptions had been achieved, ensuring the full volume of work.
The well 78 of the Kotelevsky gas condensate field was also killed by a separate batch feeding of the components of the blocking liquid. The pumping volume was 3.5 m3. Endurance (stability) on the face was 24 hours.
The absorption was eliminated. The workover services of the well carried out for 4 months, confirmed the absence of absorption of the killing liquid.
The technology of blocking with gel solutions has also been tested in case of the killing of well 75 of the Yablunovskoye gas condensate field in overhaul.
The gel composition was prepared in a container with a volume of 25 m3 with parameters: fluidity – 53 s, ?= 990 kg / m3.
The volume of 20 m3 of technical water was pumped into the well to obtain circulation. After that, 7 m3 of blocking composition was pumped into the pipe space and it was pushed through to the perforation interval. The displacement pressure did not rise above 10 MPa. For borehole Killing (plugging), the well is maintained with a closed annular space for 12 hours. After the discharge of the well, it was established that blocking of the absorption was achieved, allowing for the workover services.
Process of wells piping arrangement with special equipment during repair and insulation work is shown in Fig.3.

Analyzing the results of field research, it can be concluded that the developed method of blocking absorbing layers is reliable, simple, ensures the preservation of the filtration properties of the layer regardless of the value of the layer pressure. The created barrier sustained reprisals up to 20 MPa. After the workover, the wells were developed by various methods. In the process of inducing the inflow from the formation due to the attendance of surfactant in the killing liquid, effective cleaning of the bottom hole zone from the layer’ plugging (killing) substances is ensured. In tab. 1. The results of development of wells for some localities of the State Enterprise “Ukrhazdobycha” after killing are presented. 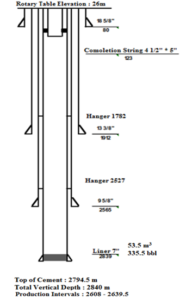 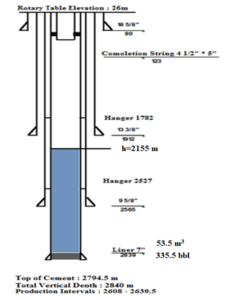 Thus, field studies have confirmed the effectiveness of the developed well killing technology with the use of solutions with high blocking ability, wide limits of control properties, abundant initial components, simplicity of preparation technology, and environmental friendliness.